I was shocked at some of the fake news on Trump I saw circulating on social media and some African news sites.

Sadly, I saw some Nigerians and citizens of other African countries believed these false stories without doing basic research.

This just goes to show you how the media easily deceive people. 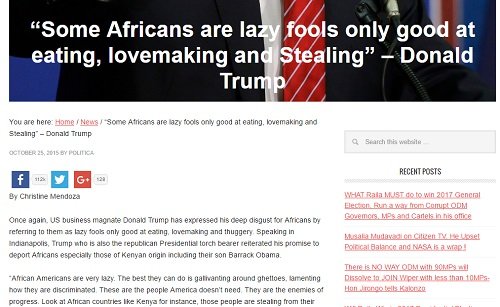 Here’re some of the popular statements Trump never made:

‘Africans are lazy fools only good at eating, lovemaking and thuggery’

This false story circulated on various African websites and I knew it was fake because I never saw any mainstream media write about it. 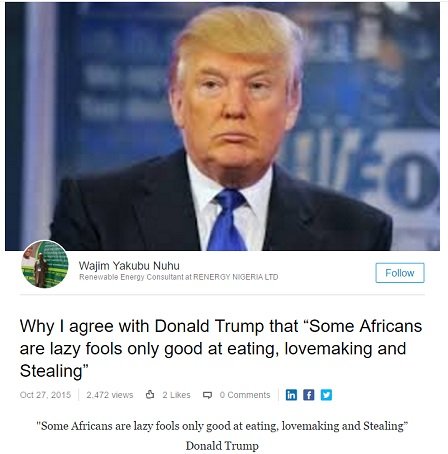 “We need Africans out”

There’re various versions of this. 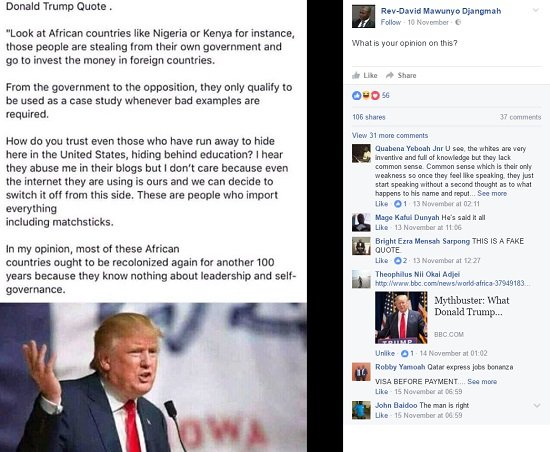 “African Americans are very lazy. The best they can do is gallivanting around ghettoes, lamenting how they are discriminated. These are the people America doesn’t need. They are the enemies of progress. Look at African countries like Kenya for instance, those people are stealing from their own government and go to invest the money in foreign countries. From the government to opposition, they only qualify to be used as a case study whenever bad examples are required. How do you trust even those who have ran away to hide here at the United States hiding behind education? I hear they abuse me in their blogs but I don’t care because even the internet they are using is ours and we can decide to switch it off from this side. These are people who import everything including matchsticks. In my opinion, most of these African countries ought to be recolonized again for another 100 years because they know nothing about leadership and self governance” Explained Donald Trump bitterly as he illuminated how he plans to reconstruct America and restore its lost glory.”

We need to get the Africans out. Not the blacks, the Africans. Especially the Nigerians. They’re everywhere.

“I went for a rally in Alaska and met just one African in the entire state. Where was he from? Nigeria! He’s in Alaska taking our jobs.

“They’re in Houston taking our jobs. Why can’t they stay in their own country?

“Why? I’ll tell you why. Because they are corrupt. Their Governments are so corrupt, they rob the people blind and bring it all here to spend.

“And their people run away and come down here and take our jobs! We can’t have that! If I become president, we’ll send them all home.

“We’ll build a wall at the Atlantic Shore. Then maybe we’ll re-colonize them because obviously they did not learn a damn thing from the British!”