Americans React To The Arrival Of Ebola In America

Just last Tuesday, the first case of Ebola in the U.S. was reported in Dallas, Texas. Just like how Nigerians are angry at Patrick Sawyer for reportedly introducing the deadly disease to Nigeria, some Americans are angry at Eric Duncan. Interestingly, some are also angry at their government for letting that to happen. Their argument is that a person from an Ebola-stricken country should not have been allowed into U.S. soil. Here are some screenshots of what some Americans actually think: 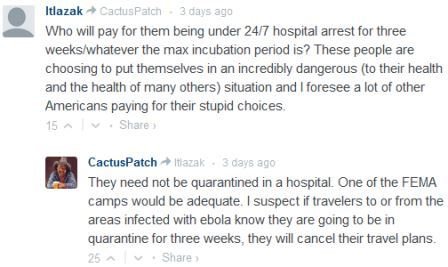 What you should know about Eric Duncan 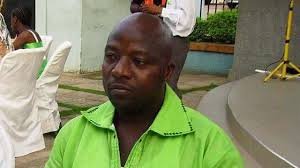 Eric Duncan is a Liberian, just like Patrick Sawyer (what a coincidence). U.S. Federal and state health officials said he left Liberia on the 19th of September and reached the U.S. on the 20th of September.
Liberian officials said he was appropriately screened before he left for the U.S. However, they accused Eric Duncan of lying about his exposure to the disease, and said he will be prosecuted.

According to VanguardNgr, the United States’ Center for Disease Control and Prevention dispatched its personnel to study how Nigeria contained the spread of the Ebola sickness–Nigeria as we all know is currently Ebola free.
U.S. health officials have accessed over a 100 people that may have had possible contact with Eric Duncan. Four members of his family have also been quarantined.

Food and other supplies have been delivered to the apartment, where four people have been ordered to stay indoors until 19 October

What Americans should know

To those Americans that want their government to stop flights from Ebola-stricken countries, I suggest you all read this and maybe have a rethink.